It is not unusual for the Rivera family to wake up to the loud clatter of trash hitting the pavement below their third floor apartment window at 3 a.m. on a weeknight. They have been disturbed by illegal dumping countless times in their Dewitt Clinton Houses apartment on 110th St. and Park Ave. and they know there are probably more nights like this still to come.

“It makes a lot of noise and I’ve got three little kids,” said Mirta Rivera, 57, whose apartment faces the garbage dumpster for the entire building. Not to mention the sour smell of rotting waste and swarms of flies that often prevents her from opening her windows during the day.

Incidences like these are just one of the trash problems within the New York City public housing authority buildings throughout East Harlem. Illegal dumping and certain tenants who do not make proper use of the garbage facilities plague the rest of the residents who live in these complexes. Although the tenant associations and management try to enforce the rules, they say there is only so much they can do to control garbage disposal in the large complexes, some of which house nearly 4,500 people.

There are 23,028 public housing apartments in this district – the highest number of units in New York City. Each has multiple places to dispose of garbage. A garbage chute on each floor leads to an incinerator or a trash compactor. Most complexes provide one outside bulk garbage dumping area to drop large items like furniture for every two buildings. For most units, the city Department of Sanitation picks up trash twice a week, but some use a system where they call in pick ups as needed.

Illegal dumping is defined by the Department of Sanitation of New York as garbage that is placed in non-designated dumping areas or when a person drops their trash at another person’s place of residence. Although the department charges fines from $1,500 up to $20,000 for illegal dumping and has two programs in which the public can collect monetary awards for reporting this crime, the issue remains a large problem at the complexes.

“This is a citywide problem,” said Nelson Diaz, 46, who has worked in public housing for more than 22 years and is currently the superintendent of East River Houses Consolidated, which oversees Metro North Plaza, Gaylord White Houses, Woodrow Wilson Houses and East River Houses. “Surrounding businesses do get away with murder because they dump on us when we aren’t open from 5 p.m. to 8 a.m. And of course when we’re not looking.”

Many East River Consolidated officials say nearby stores, co-ops and other businesses in the vicinity frequently drop off old mattresses, furniture, appliances and debris on their compound to save money by not having to dispose of the waste themselves. The building authorities and caretakers will get rid of the waste because once it is on their property, they are obligated to take care of it. This takes time out of their workdays that could be spent maintaining the buildings and the facilities.

“It always takes away time because now we have to handle garbage two to three times the normal amount,” said Louis Nieves, borough administrator.

But illegal dumping is not the only trash problem within public housing. Many residents do not take the time to throw their waste in the proper receptacles or down the garbage chute, leaving bags of foul smelling domestic waste such as rotten food or old diapers in the halls, dropping it in zones marked for no dumping around the buildings, or even throwing it out the windows.

“They throw cups, papers, diapers, sanitary napkins – disgusting stuff,” said Eric Ruiz, 34, a resident of the Taft Houses on 112th St. and Madison Ave. who has lived in public housing his entire life.

This kind of excess garbage attracts rodents and cockroaches, which most residents can see often. Aside from health concerns, safety is a major issue among managers, janitors and residents in public housing because tenants do things such as burn couches in the hallway or drop glass bottles from the 20th floor.

“The year before last someone threw a can of peas from a high floor and it hit a UPS man and split his scalp open,” said Teri Dawson, 46, who manages East River Consolidated. “Luckily he lived.”

Management and tenant associations in several complexes said they have tried to address the problem by posting no dumping signs, placing articles about proper ways to dispose of trash, residential newsletters, and have the police and sanitation specialists talk to residents about the consequences of dumping trash wherever they please.

Housing units try to enforce fines for residents who they catch dumping trash in non-designated areas. Managers and caretakers will dig through the trash themselves and find mail, prescriptions or anything with the residents’ name on it that tells them who left their trash there. They charge them with fines, but Dawson said that many residents never actually pay them.

Although there are those who leave sacks of decaying garbage outside their doors or drop their food wrappers wherever they please, there are some residents like Julian Febres, 77, who take pride in their home and put forth extra efforts to maintain the cleanliness of their complex. Febres is a member of the tenant association for the Dewitt Clinton Houses and has lived there for 31 years. He sweeps his hall and the areas outside his building often, but said that sometimes residents will walk by and throw out their cigarettes or trash right in front of him. Febres knows who it is but he is afraid to tell the authorities.

“I don’t want my family to get in trouble,” Febres said. “If you write them up, you’ll never know if someone will come by your house with a gun and boom!” 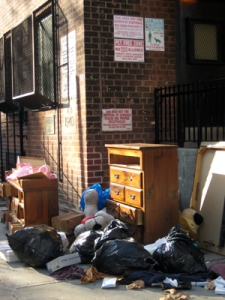 Although some tenants and authorities try their best to keep the units clean, there are many that remain indifferent and litter as they please. Public housing management and residents agree that stronger enforcement is necessary but the bottom line is, there are not enough tenants that care for their quality of living.

“You have some good and some bad tenants, but the bad make it worse for everyone,” says Dawson. “A house is what you make of it.”